ANGOLA, Ind.– At an awards banquet on Thursday night at The Steuben County Event Center, Thunder Lakes received the “Best New Business of the Year” award in the 6th Annual Angola Area Chamber of Commerce Ebbie Awards event. Thunder Lakes is an indoor shooting range and outdoor sports store that opened it’s doors in May of 2018. The range has already grown to be a favorite place in Angola for shooting sports including pistols, rifles and archery as well as firearm safety classes.  Thunder Lakes also sells firearms, archery, fishing and hunting supplies.

The Excellence in Business Accolades Banquet is the AACoC’s signature event of the season and one that celebrates member businesses that are peer-selected “best of the best” in eleven different areas of business achievement. Dubbed the “Ebbie Awards”, these Excellence in Business Accolades acknowledge the professionals that set the bar in their respective categories.

“Thank you so much to the entire community for your support during our first year of business. It has been a pleasure to serve you and our staff looks forward to many more years to come! Thank you also to the entire business community and the Angola Area Chamber of Commerce for this award.”

Award winners are determined by Chamber member votes.  This year, the event was sponsored by Farmers & Merchants State Bank.

About Thunder Lakes, Indoor Range • Outdoor Sports
Thunder Lakes is a locally owned and operated indoor shooting range and outdoor sports retailer located in Angola, Ind., at exit 350 off I-69. Opening in May of 2018, the facility is located at 2160 W 175 N Angola, IN 46703. The facility offers a customer friendly and safe environment for shooting sports and outdoor enthusiasts to practice lawful firearm ownership and use, as well as a trustworthy retailer in the firearms, hunting and fishing industries. 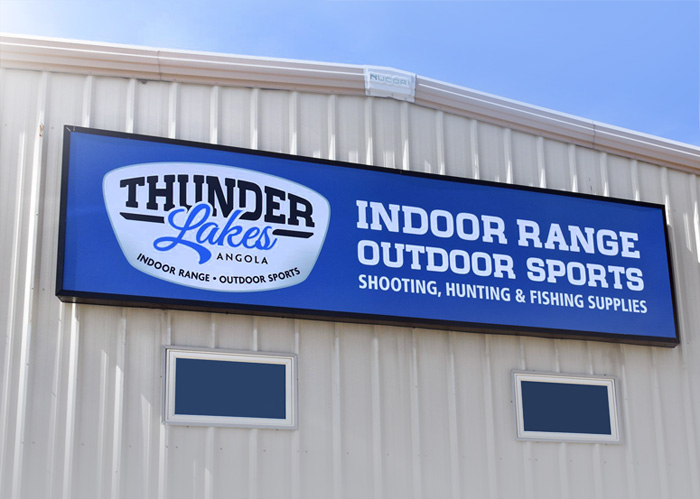 ANGOLA, Ind.– Thunder Lakes is set to hold a ribbon cutting ceremony on May 9th followed by a series of private events before opening to the public on May 14th. The new facility will be located at 2160 W 175 N in Angola, Ind., and is being touted as a premier firearms and outdoor sports retail center as well as indoor shooting range.

The remodeled facility located just off of I-69 at exit 350 is right in the heart of lake country in northeast Indiana, and the company’s ownership feels the location couldn’t be better. With easy access off of I-69, the facility will be accessible to outdoor and shooting sports enthusiasts throughout the region.

“The community support for the facility and all that it will be offering has been overwhelmingly positive, and when customers see the impressive facility that JICI Construction has designed and constructed, they’ll be as excited as we are.”

The new facility is equipped with (10) 15-yard and (5) 25-yard indoor shooting lanes. The 15 lanes are equipped with gear from Range Systems, a national industry-leading provider of shooting range equipment. With quality shooting stations and a clean facility designed to make visitors feel comfortable and welcomed, the facility looks to cater to a wide base from beginners to expert marksmen. The ability for Thunder Lakes to host leagues and other events will be yet another avenue in which shooting enthusiasts will be able to interact with the facility, but the range will not be the only draw.

A retail center within the facility will be outfitted for not just those looking for a firearms retailer, but also for those in the market for fishing and hunting gear. The facility is taking a holistic approach to outfitting the region by suppling a wide variety of firearms, bows, ammunition, firearm accessories, hunting gear, fishing rods, reels, tackle, live bait and more.

Another part of the Thunder Lakes holistic approach is based in education and safety. Two educational classrooms will also make up the framework of the facility, the newest of its kind in the region. The classrooms will provide opportunities for hunters’ education courses, self-defense and basic firearms safety courses, just to name a few.

“With the friendly atmosphere and knowledgeable staff we have here at Thunder Lakes, we want our customers to enjoy their experience at the range and feel well equipped for their favorite outdoor sport,” “We are extremely thankful for the team of individuals who have come together to make this dream a reality. We are excited to be here in Angola, and look forward to not only supporting, but being actively involved in our local community.”

For more on Thunder Lakes you can visit ThunderLakes.com, and Facebook @ThunderLakesAngola.

Thunder Lakes is a locally owned and operated indoor shooting range and outdoor sports retailer located in Angola, Ind., at exit 350 off I-69. Opening in May of 2018, the facility is located at 2160 W 175 N Angola, IN 46703. The facility offers a customer friendly and safe environment for shooting sports and outdoor enthusiasts to practice lawful firearm ownership and use, as well as a trustworthy retailer in the firearms, hunting and fishing industries.

This error message is only visible to WordPress admins

Please go to the Instagram Feed settings page to create a feed.